So it seems everyones been doing it stateside and after seeing some inspiring films of how Paddle board Yoga or SUP Yoga is done, I decided to give it a go myself in Brighton last summer.

If anyone fancies giving it a whirl, I will be taking a 90 minute workshops in ibiza all through the summer of 2013.

First up, we try it on dry land at Salinas, with a board supported by Gel cushions, then we take it to the water.

Included in the 25 Euro session, is board hire & as with all JoGa sessions, great choons in my new waterproof SurfoGa soundsystem!

Email me for spot: Jo@joyoule.co.uk

Last year I had to pull out of going to Bestival, despite a lifelong NEED to see The Cure and Bjork, to work at the Berlin festival, so I could not be more excited, to finally pop my Bestival cherry so to speak, after being asked to teach JoGa there this year.

I will be taking three JoGa Beats workshops at the festival on the Isle of Wight, on the 7,8 and 9 September respectively. All classes are FREE and will focus on the idea of breathing to the beat.

We spend our lives rushing around like headless chickens, not giving ourselves a chance to think or even breath at times, so this is your chance to focus purely on you, your breath and the delicious Vinyasa flow style, meditative, playful movement that will follow.

At this stage it looks like our sessions will be a variety of times, Midday Friday, 4pm Wildlife themed class Saturday in full fancy dress please, and 4pm again on Sunday in the Soul Park but the timings may change, so watch the @JoGaBeats twitter feed for updates.

One class will also be fancy dress, on the day of the Wildlife theme (Saturday), so feel free to tweet playlist ideas for that or leave a message on our JoGA FB PAGE….any song with an animal mention – this WILL be going in.

After a recent feature in the Body Confidence Issue of RED Magazine, Jo was asked to be a guest in the Ladies Lounge on BBC London. 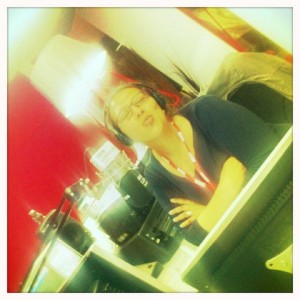 Hostess with the mostess, Kath Melandri, looks at the burning issues of the week on Saturday nights from 10pm, as well as spinning some fine tunes.

This week Kath chatted to Jo about the recent launch of her new style of music led Yoga – JoGa, as well as some news stories that have caught Jo’s eye this week.

Just off the plane from India after 4 months studying Yoga in Goa and Kerala, Jo has launched her own unique, music led, style of classes, taken from the teacher training program she completed at Ashiyana in Mandrem.

The course incorporated different styles of Yoga – with no boundaries set – and students were encouraged to develop a class that played to their own strengths and passions.

After feeling a strong affinity with the Vinyasa Flow style and way it worked almost as a dance to music, Jo has created a series of playlists and classes called JoGa Beats.

Each week’s class will have a musical theme at the state of the art studio at Aloka in Brighton & comes with full on coloured, disco lights, brand new built in sound system & clean non-sweaty Natural jute eco Yoga mats (beat that Mr Bikram!)

Arrive early for a space, email jo@joyoule.co.uk to book your spot or by leaving a message on the Joga Facebook Page.

Check here for playlists and DJ sets after class:
Follow JoGaBeats on Mixcloud